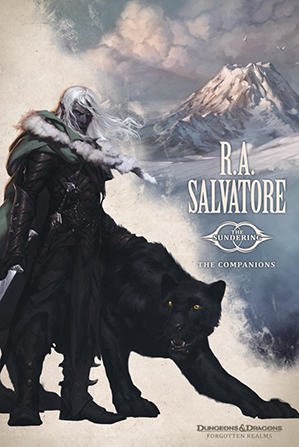 Drizzt and Guenhwyvar
Companions Codex is a trilogy of books written by R.A. Salvatore and is the penultimate entry in the The Legend of Drizzt series that has been running since the late 80s. Chronologically it is preceded by The Neverwinter Saga and followed by the final entry in the overall series: Homecoming.
Advertisement:

There also is a 2013 novel called The Companions, which is often credited as book zero of Companions Codex, but actually belongs to The Sundering, an event-based series of books in the Forgotten Realms canon that is written by several different authors who contribute to general Realms canon. However, it ties in directly with Night of the Hunter and stars the Companions of the Hall and so is usually counted among the Drizzt books.

Due to the nature of the series, there will be unmarked spoilers for previous entries in The Legend of Drizzt books.

Night of the Hunter starts where The Neverwinter Saga left off: with Drizzt gravely injured on the slope of Calvin's Cairn, alone in the snow. But it also starts where The Companions left off, namely with the reborn Companions of the Hall, who, after growing up as their new reincarnated selves, are now on a mission from Mielikki to save their drow companion. Successfully managing their task, they are faced with the new problems arising in the Silver Marches and the ancient dwarven city Gauntlgrym.

The books also continue the storyline of the expansionist plans of the drow of Menzoberranzan, who plan to aid their goddess Lolth in her attack on Mystra's Weave (the source and network of arcane magic in Faerun). They mount a large scale attack on the cities of the Silver Marches, allying with the orc kingdom of Many-Arrows, a plethora of frostgiants and other northernly nasties and two ancient white dragons. Learning from past failures, Lolth grants the newly appointed Archmage of Q'Xorlarrin a powerful spell that darkens the sky above the Silver Marches permanently and so not only demotivates the goodly races living in the area, but also negates the disadvantage the light-sensitive drow eyes would suffer on the surface.

A prolonged war between the goodly folk of the Silver Marches and the enemy forces erupts and the reunited companions have to take action on different fronts.