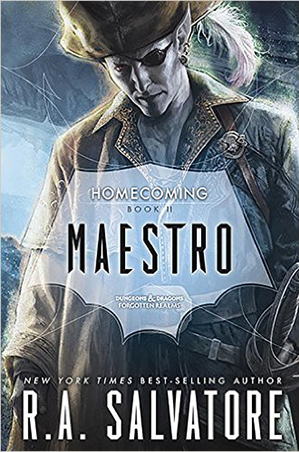 Cover of Maestro
Homecoming is the final entry in R.A. Salvatore's long-running The Legend of Drizzt series. The journey of the drow renegade Drizzt Do'Urden started 1988 in The Icewind Dale Trilogy and published new installments for 28 years to conclude in 2016 with the last book, Hero, the 30th book in the main series. Chronologically, Homecoming is preceeded by Companions Codex. Homecoming ties in to the Forgotten Realms event Rage of Demons.
Advertisement:

Due to the nature of the series, there will be unmarked spoilers for previous installments.

The first book, Archmage, starts out in Menzoberranzan, after Lolth's failed attempt to take over Mystra's weave. Archmage Gromph Baenre is disillusioned with his position in drow society, begrudging the fact that he is one of the most powerful magic users of the city, but still considered expendable because he is male. Then there is the issue of his daughter, the reborn Yvonnel Baenre, who starts to dictate the events in the City of Spiders from behind the scenes. On the surface the dwarves of Mithral Hall and Gauntlgrym have to search for a permanent solution to keep the fire primordial in the forge of Gauntlgrym from escaping. Their only idea leads them to the destroyed Hosttower of the Arcane in Luskan.

In Maestro the consequences of the drow's machinations become apparent: The barrier between the the real world and the Abyss is weakened and the Underdark is crawling with lesser- and greater demons. Of especially pressing concern is the demon Prince Demogorgon who is now on the lose and threatens Menzoberranzan's existence. At the same time, Drizzt resolves to rescue his old companion Dahlia from the city of drow and he enlists and old enemy-turned-friend and the cunning mercenary Jarlaxle to get him into the magically sealed city.

Hero starts where the previous book left off, Drizzt returns to the surface but has to deal with the nagging doubt, that he is not living in reality anymore, but trapped in a dream conjured by Lolth. He thinks that his companions have not been resurrected, but are illusions made by the Spider Queen to take away his joy just when he thinks he has found it.