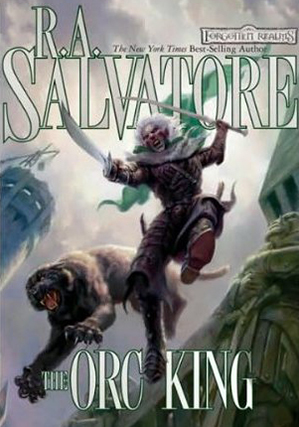 Drizzt and Guen on the cover of The Orc King
Transitions is the sixth entry in the long-running The Legend of Drizzt series written by R.A. Salvatore that centers around the renegade dark elf Drizzt Do'Urden and his adventures on the surface. The series is preceeded by The Hunter's Blades Trilogy and followed by The Neverwinter Saga.

The Orc King is a Whole Episode Flashback detailing a series of skirmishes during the time of Obould Many-Arrows' bid for power. It describes the conflict that directly led to the creation of the treaty of Garum's Gorge and the beginning of a period of peace in the Silver Marches, as they grudgingly accept the orc kingdom in their midst. It is framed by Drizzt recounting the events to the elf noble Hralien.

The second book, The Pirate King, sees Drizzt and Regis journey to the port city of Luskan, where they learn of a conflict that has broken out between the different ships and the Hosttower of the Arcane. There they meet Drizzt's old friend captain Deudermont, who has been called in from Waterdeep to help the locals sort out the conflict.

The last book, The Ghost King, marks the beginning of the Realms-wide event called the Spellplague. Magic is running wild and mages everywhere fall victim to the misfires of the Weave. Drizzt's wife Catti-brie has an accident during her spell training and is beset by a strange magical illness, that none of the clerics of Mithral Hall can heal. Drizzt enlists Jarlaxle's help in getting the group to Cadderly's Spirit Soaring, in the hopes that the strong cleric and Chosen of Denier will find a solution to Catti's problem.