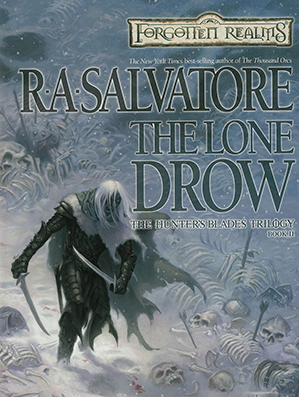 Cover of The Lone Drow
The Hunter's Blades Trilogy is a trilogy written by science fiction and fantasy author R.A. Salvatore. The books are part of the The Legend of Drizzt saga, following the adventures of Drizzt Do'Urden. It is preceeded by the Paths of Darkness series and followed by Transitions.
Advertisement:

The Two Swords was Salvatore's 17th work concerning one of his most famous characters, Drizzt Do'Urden. In this series, Drizzt takes a stand to stop the spread of chaos and war by an overambitious orc king across Drizzt's adopted homeland. The series reached the New York Times bestseller list.

Returning from their latest journey, Drizzt and the Companions of the Hall are sought out by a curious dwarf named Thibbledorf Pwent, who informs them that the last king of Mithral Hall has died. Bruenor, being the next in line, now has to serve as King. And it seems that his reign will begin with a time of crisis: A powerful orc named Obould Many-Arrows has allied himself with a frost giant princess and plans to establish a kingdom of orcs right to the north of the Silver Marches. Obould is an extraordinary fighter and unusually intelligent for his race, and has allied himself with four drow advisors who do their level best to stoke the fires.