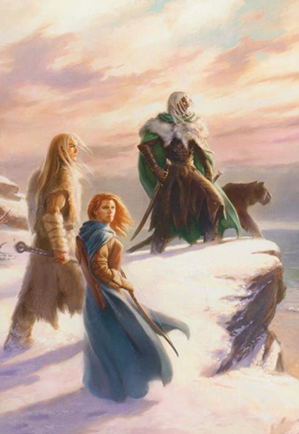 Cover of Sea of Swords
Paths of Darkness is the fourth entry in R.A. Salvatore's long-running The Legend of Drizzt series. If follows the adventures of the renegade drow Drizzt Do'Urden and his friends. It is preceeded by the Legacy of the Drow Series and followed by The Hunter's Blades Trilogy.
Advertisement:

Originally there was a fourth book in this series called Servant of the Shard, that followed Drizzt's nemesis Artemis Entreri and his adventures with Jarlaxle after The Silent Blade. However, it got two sequels in the mid-2000s and so is now part of the spin-off series The Sellswords.

The Silent Blade starts off with Drizzt planning to get rid of the crystal shard Crenshinibon. To accomplish this, he takes his friends Catti-brie, Wulfgar, Bruenor and Regis from the northern wastes of Icewind Dale far south to the Snowflake Mountains, where the priest Cadderly Bonaduce, a Chosen of his god Denier, lives next to a mountain that houses an ancient red dragon. Drizzt knows that the crystal shard can only be destroyed by the breath of such a beast. But Crenshinibon is a sentinent artifact and does its best to keep the companions from reaching their destination.

The Spine of the World follows Wulfgar instead of Drizzt, after he split from the group in The Silent Blade. Wulfgar wanders the northern Sword Coast to sort out his feelings and trauma from having been a prisoner of the Balor Errtu for seven years. He eventually arrives in the port city Luskan, where his muscular build and fighting prowess lead to him getting a job as a bouncer for a tavern.

The last book in the series, Sea of Swords introduces the elf Le'lorinel, who spends every waking hour training to be able to fight and kill Drizzt Do'Urden. He seems to have a deep-running grudge against the drow renegade, claiming that Drizzt is not the hero everyone thinks him to be, but a traitor and murderer.