Tabletop Game / Lost Mine of Phandelver 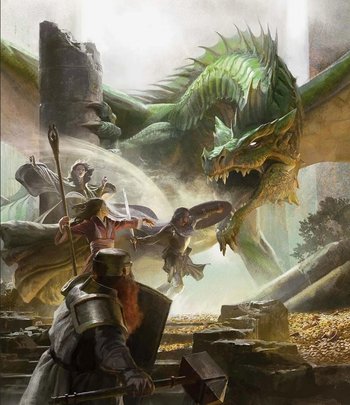 The adventure starts with the adventurers on the road to Phandalin, a small frontier village in the Forgotten Realms setting. They have been hired to transport some mining supplies by the dwarf Gundren Rockseeker, who spoke of some great find he and his brothers made in the mountains just east of the village. The adventure kicks into gear when the adventurers find Gundren's and his bodyguard, Sildar Hallwinter's horses lying dead on the road, pierced by goblin arrows. As they look into their employers' disappearance, the adventurers may find that many parties are interested in Gundren's find, and not all of them are friendly...

This adventure module is widely considered as one of the best adventures for the 5th Edition, and has won three awards: A Golden Geek Award in 2014 for "Best Supplement" and two 2015 ENnie Awards for "Best Production Values" and "Best Family Game".

Tropes that may be found in the lost mines:

DISCLAIMER: Wizards of the Coast is not responsible for the consequences of any failed saving throws, including but not limited to petrification, poison, death magic, dragon breath, spells, or vorpal sword-related decapitations.