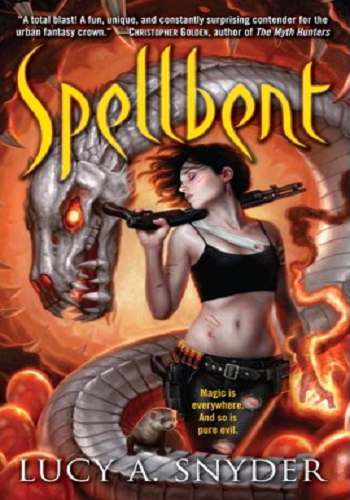 Spellbent is an Urban Fantasy novel by Lucy A. Snyder — the first in a planned trilogy of books. It's set in a world where magic works but is, for the most part, kept secret. Spellcasters are governed by councils of mages who try to keep everything running smoothly.

The book stars Jessie Shimmer, who starts out as an apprentice wizard in Columbus, Ohio. She's being taught the fundamentals of magic by her lover, Cooper Marron, but after a simple weather-control spell goes seriously awry, Cooper gets stranded in a hellish dimension, a giant monster is unleashed on the city, and Jessie suffers severe injury, losing an arm and an eye. She survives, thanks to her new familiar, a ferret named Palimpsest (or Pal, for short), but the local mage council, corrupt to the core, brands her an outlaw, bars her from trying to rescue Cooper, and puts every possible roadblock in her path.

In the sequel, Shotgun Sorceress, Jessie has a lot more magical power, but she's also gotten on the bad side of a bunch of magical alien gods, who teleport her to a magic-drained county in Texas, where she has to save her friends and an entire town from a monstrous soul harvester, all while battling her own magically-debased emotions.

The third book in the series, Switchblade Goddess, finds Jessie at How We Got Here, where she must face off against the soul harvester, save Pal from an illness that's killing him, and do this pretty much unassisted because Cooper and his brother, The Warlock, have to return to Ohio for a family emergency, and her Long-Lost Relative is busy helping with cleanup from Cuchillo's having been under siege by said goddess.

Jessie, Cooper, and many of the other characters in the novels also appear in Snyder's erotica collection "Orchid Carousals."

The Spellbent Novels Contain Examples Of: