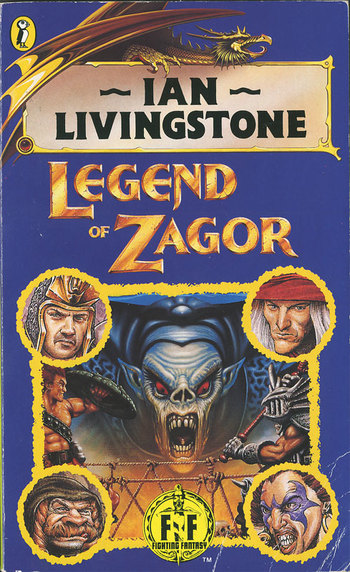 Legend of Zagor is the 54th entry of the Fighting Fantasy series of Gamebooks, written by Keith Martin, though credited to Ian Livingstone, who was meant to write it, but found he did not have the time to do so, so Martin wrote it instead; he made little effort to copy Livingstone's style, either, as the moment the book was released readers noted how similar the writing style and gameplay were to Martin's, creating a Running Gag in the fandom that Livingstone had stolen the credit for the book from Martin and buried him in his back garden. Livingstone admitted the truth of the book's authorship when prompted in 2014 (it was for a book on the history of the series, and was the first time anyone had directly asked him about it).

After the events of Return to Firetop Mountain, Zagor was once again stopped and killed by a brave adventurer, who slew the treacherous revenant Warlock and put an end to his threat to Allansia and Titan... the keyword here is, to Allansia. In the parallel world of Amarilla, a great battle was fought by the forces of good to defeat the powerful Bone Demon plaguing Castle Argent and his armies of Dragons, orcs and demons, and the being was sealed forever in the Casket of Souls. However, your hero is soon summoned by the good king Irian of Sanctuary to discuss an urgent matter: using a magical crystal he contacted Gereth Yaztromo, of Titan, who reveals that the soul of Zagor entered the dimension of Amarilla and was sucked inside the Casket of Souls, merging with the Bone Demon, who's now free back at Castle Argent, free to start a new kingdom of ruin and horror from Tower Island. It is up to you to wear the shoes of one of four adventurers (Anvar the Barbarian, Braxus the Warrior, Stubble the Dwarf and Sallazar the Wizard) and undertake a perilous quest: enter Castle Argent, defeat Zagor and make sure that this time he doesn't return from the dead again to threaten Titan or Amarilla.

Legend of Zagor is highly unusual since, as stated above, you can play as four pre-generated characters (though you still have to roll the scores), each having unique advantages and disadvantages (Anvar is never taken by surprise but cannot wear metal armor, Braxus can use any weapon and armor he wishes, Stubble is advantaged against certain enemies and traps but is too short for certain sections, Sallazar is the best spellcaster and can read runes, but cannot use two-handed weapons or wear armor) which greatly adds to the replay value, as each hero has a different way to reach the end. You can explore many parts of the castle searching for Zagor or the Tower Chests to weaken his powers and are frequently allowed to revisit certain hub locations in case you miss something, sometimes you can even revisit a certain room later if you wish so.

On the other hand, as many reviewers point out, there are plenty of combat situations with powerful opponents, more often than not in compulsory battles. There's also a magic system that has you spending Magic Points to activate scrolls and items or, if you're Sallazar, spells. Magic points can be partly replenished by using Magic Rings.

Legend of Zagor provides examples of: