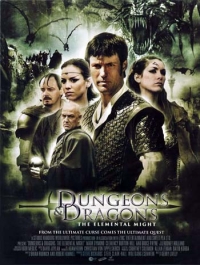 3000 years ago, Faluzure, the evil dragon god of decay and undeath, attacked the kingdom of Turan. The Turanian mages were able to repel Faluzure and imprison him.

100 years ago, the evil mage Damodar (Bruce Payne) — formerly The Dragon to Jeremy Irons' Big Bad in the previous Dungeons & Dragons movie — fought against the people of Ishmir and was cursed with a century of suffering as one of the undead. Now he has returned, and with the Black Orb of Falazur, seeks to resurrect the dragon god to take his revenge on Ishmir.

The people behind this produced a third film called Dungeons & Dragons: The Book of Vile Darkness, which premiered on Syfy in November 2012.

Dungeons & Dragons: Wrath of the Dragon God provides examples of the following tropes: