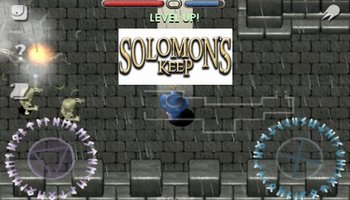 Solomon's Keep is a free Dungeon Crawler, released in 2010 for IOS platforms by Raptisoft. The player plays as Sirius, a student wizard whose final test is to traverse Solomon Dark's Keep and defeat him.
Advertisement:

Sirius has four elemental abilities available: Magic Missile, Fireball, Frost Jet and Lightning. As Sirius levels up, he gets new upgrades to his abilities and magic. Furthermore, two elements can be "welded" together to create a new magic spell.

A prequel to the game has been released, Solomon's Boneyard. It is an arena survival game featuring the same Big Bad and enemies. An interquel game, Solomon Dark, is currently in development.

Not to be confused with the much older Puzzle Platformer Solomon's Key.