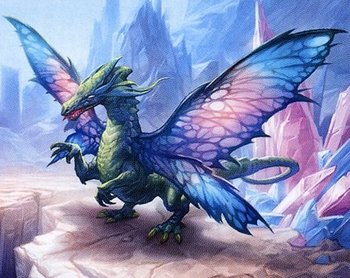 "Little faerie dragons are made of sugar and spice and maniacal vice."
— Brightwing flavor text, Hearthstone: Heroes of Warcraft
Advertisement:

Fairy Dragons are a somewhat uncommon subtype of dragon found in fantasy works. They're typically represented as tiny dragons — normally in the Shoulder-Sized Dragon range if not smaller — with insect wings (usually butterfly ones) similar to those attributed to fairies.

In personality they are generally nicer, more playful, and more carefree than "true" dragons and much more likely to help the heroes. They often have ties to fairies as well as other dragons, and they may be associated with elves as well.

While they might have breath weapons like other dragons, these are rarely directly harmful. They are known to breathe out gases that induce euphoria, confusion or other addled states of mind, although a healing breath isn't unheard of. Another notable trait of theirs is that among the dragons, they are the most likely to be attuned to or able to cast magic.

Sub-trope of Our Dragons Are Different, Our Fairies Are Different and Hybrid Monster. See also Good Wings, Evil Wings and Feathered Dragons.