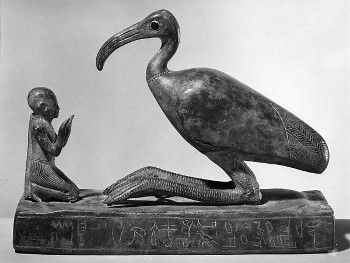 Thoth. Because the bird is the word.
Advertisement:

The logic is pretty simple: the gods, as everyone knows, live somewhere up in the sky. Birds also inhabit the sky, or at least spend more time there than any other creature in common experience. Therefore, birds have a special connection with the divine. Many cultures see birds as bearers of omens, whether good or bad depending on the type of bird, and some go even farther, with myths and tales depicting them as messengers proffering instructions and advice to mortals, or even providing services of some sort. Angels, additionally, are often depicted as winged and are seen mainly as messengers of God in scripture.

Specific species of bird can be associated with certain gods. Eagles are particular favorites and often serve the Top God of a particular pantheon; however, note that eagles are also used to represent mundane values and so are not always part of this trope. If the writer is feeling more fantastically-inclined, mythical birds such as phoenixes might get used. Gods of death or the underworld have their own preferred representatives which would best be avoided: see Creepy Crows and Ominous Owl. Vultures are another popular choice. Other flighted creatures are sometimes seen in the same way: see Butterfly of Death and Rebirth and Macabre Moth Motif. Birds being seen as sinister in general are Feathered Fiends. A Sub-Trope of this is Doves Mean Peace.