Literature / The Year of Rogue Dragons 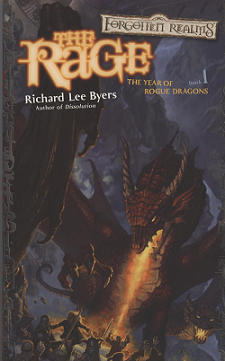 What do you do when every dragon on the planet starts to turn Ax-Crazy and threaten to kill everything else?

Well, if you're professional dragon hunter Dorn Graybrook, Kill 'Em All would seem to be the appropriate answer. Things are more complicated than that, though.

The Year of Rogue Dragons is a trilogy by Richard Lee Byers. It covers the calamitous events of 1373 DR, the "Year of Rogue Dragons". Set in the Forgotten Realms, it follows a group of adventurers as they wander Faerun trying to discover the secrets behind the Rage, when all of the Faerûnian dragons go berserk.

It has three books: