Because of its nature as a sequel, spoilers for all preceding Fairy Tail works will be left unmarked. You Have Been Warned. 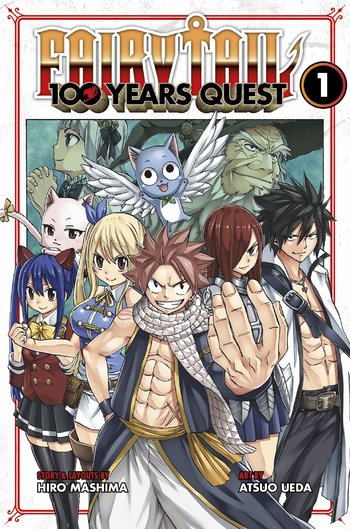 The adventure's not over yet!
Advertisement:

Fairy Tail: 100 Years Quest is a Spin-Off Sequel to Hiro Mashima's Fairy Tail, illustrated by Atsuo Ueda with storyboards provided by Mashima himself.

Picking up immediately where the original story left off, Natsu and his team are off on the most challenging mission any guild has to offer: the 100 Years Quest, which no wizard has ever managed to complete in over one hundred years. Their goal: to hunt five surviving dragons so ungodly powerful, each one could rival the might of Acnologia, the single most formidable adversary they have ever faced. Back at home, the rest of the guild welcomes their newest recruit—a girl named Touka—who harbors dangerous secrets that wind up getting all of Fairy Tail entangled in the quest.

The series launched on Weekly Shonen Magazine's "Magazine Pocket" app on July 25, 2018, just one day off of a year after Fairy Tail's conclusion. Due to Mashima's responsibilities writing and drawing for EDENS ZERO, which runs simultaneously with this, the chapters of 100 Years Quest are released once every two weeks, with weekly chapters being published on special occasions. The manga has also been officially licensed by Kodansha USA

On September 11, 2021, it was announced that the series will be getting an Animated Adaptation.