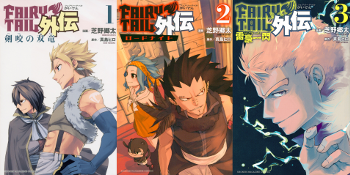 Fairy Tail Side Stories (a.k.a. Fairy Tail Gaiden) is a Fairy Tail spin-off trilogy written and illustrated by Kyota Shibano. Each volume is a post-Tartaros story focusing on a different group of characters from the Fairy Tail universe, and lasts two story arcs: