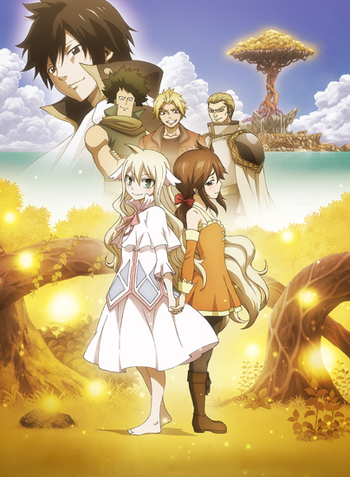 Everything that is always starts at zero.
Advertisement:

A Fairy Tail Spin-Off written and drawn by Hiro Mashima, Fairy Tail ZERØ details the events that lead to the founding of the titular guild a century before the beginning of the main series.

This is the tale of Mavis Vermillion, a girl who lived on a single island for the first thirteen years of her life. She sought to see the world and fulfill her dream of seeing a fairy.

aired from January to March 2016, set between the Tartaros arc and the Time Skip leading into the Fairy Tail Revival arc. However, it is a filler In Name Only in that it only serves to buy time for the manga to work its way further into the story, as the events of the spin-off are Canon to the main story and lay foundations for events to follow.