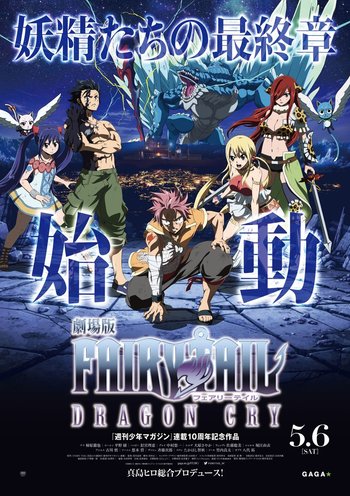 That power... is it hope or destruction?* From left to right: Carla, Wendy Marvell, Gajeel Redfox, Natsu Dragneel, Lucy Heartfilia, Erza Scarlet, and Happy. In the background: Animus.
"Grave of the dragons. Long ago, this was the final resting place for the defeated dragons. It is here that the power that can destroy the world sleeps; Dragon Cry. If this power is used, the light of the dragons will descend upon the Earth..."
— Narrator, Trailer 2

Fairy Tail: Dragon Cry is the second anime movie of the Hiro Mashima series Fairy Tail directed by Tatsuma Minamikawa, written by Shoji Yonemura and produced by A-1 Pictures. It was released on May 6, 2017.

Natsu Dragneel (Tetsuya Kakihara) and his friends and travel to the island kingdom of Stella to find dark secrets, fight new enemies and save the world from destruction by reclaiming the mysterious artifact, Dragon Cry. Amidst all this chaos, something mysterious will awaken inside Natsu, and whether it is good or bad is yet to be determined...

. As with previous Fairy Tail entries, Funimation does the English version. Both the dub and sub were released for a limited theatrical run in the U.S in August 2017 (the sub going first and the dub later in the week) before being released to Blu-ray on November 17th, 2017.

The film is chronologically followed by the Alvarez Empire arc.