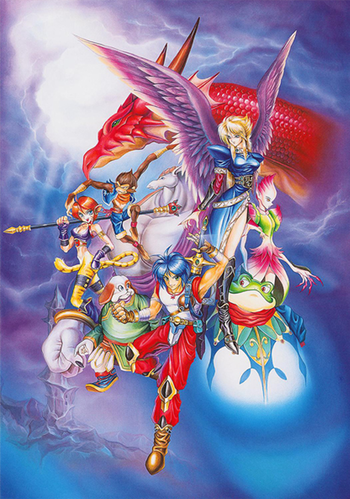 It was like waking from a long dream... but, now his father and sister have disappeared and no one else recognizes him...
He dreamt of a horrific demon who ripped his heart and body apart... but it remains just a dream.
Yet, the vision remains strong. Deep within the corners of his mind, he hears it calling. A different world... A world of silence... a world of darkness. He moves towards it, feeling both fear and exhiliaration. He succumbs and the darkness welcomes him.
"You are the one" the demon screeches. Reaching within his own heart, he realizes that it is true. Then, in that moment, reality washes away and the dream begins to take shape...
—Intro Narration
Advertisement:

The second entry into the long-running and popular Breath of Fire Japanese Role-Playing Game series. It was released for the SNES in December 1994 in Japan and December 1995 for North America. It was later ported to the Game Boy Advance in December 2001 in Japan, April 2002 for North America and June 2002 for Europe. It includes updated Character Portraits, a dash button, upgraded graphics for the menu screens, a trade option between games (with a few bonus items) and a re-balancing of Exp/Money given by enemies.

Ryu Bateson seems to have the ideal life as a young child. Sure, his mom is missing, but his sister Yua and father Ganer love him very much. However, that all changes when, after saving his sister from a rampaging monster, he goes back into his hometown of Gate only to realize that no one remembers not only who he is, but who his father or sister are (the two of them have disappeared, natch). After spending the night at the local church's orphanage with his new friend Bow Doggy, he decides to flee his hometown for greener pastures.

Flash forward 10 years where he and Bow are now Rangers, working to protect the people of HomeTown from various monsters. One day, they get a mysterious call from a princess of Windia that will change their lives...

There are two things that stand out most about this game. The first is the terrible, terrible job that Capcom did translating it (and by some accounts the GBA port's translation is even worse!) from the original Japanese, particularly all the butchered names. The second is the fact that despite this being the '90s, when Nintendo of America's censorship policies were in full swing, this game got away with having numerous and explicit references to both religion and death. The Big Bad is a deity, for crying out loud! It's pretty much the opposite of what happened with Breath of Fire IV.