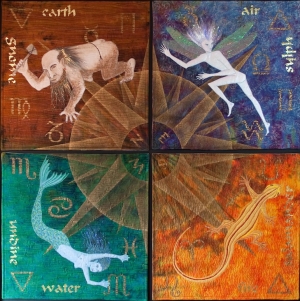 )
Please do not use without permission.
Advertisement:

Except for the Salamander,note See the Myths section for a detailed explanation on that one they first appeared in the alchemical works of Paracelsus. From there, these elementals took root in popular imagination and frequently appear as a set representing their respective elements. They are the most common form of Elemental Embodiment for the classical elements.

Subtrope of Elemental Embodiment. May be a kind of Nature Spirit. See also Elemental Powers.