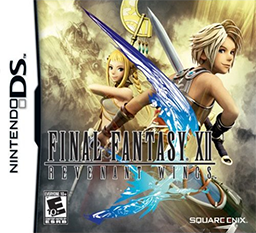 A Real-Time Strategy sequel to the thigh-bitingly popular RPG Final Fantasy XII, set in Ivalice. Rare in that it is a direct sequel to the game and stars the same characters.

A few years after the events of Final Fantasy XII, Vaan and Penelo are invited by Balthier to explore the Ruins of Glabados, which is said to contain the legendary treasure of the Eternal. When they arrive at the place, they find out that the famed Cache of Glabados is actually two mysterious auracite crystals, which Vaan and Balthier divide among each other. Taking the Cache causes the ruins to collapse, resulting in Vaan losing his newly-bought airship and being back to his old life in Rabanastre.

This was not to last, however; a few days later, a huge derelict airship lands just outside Rabanastre, drawn to the crystal Vaan took with him. Vaan decides to raid the airship and take it for himself, dragging his younger friends Filo and Kytes with him. Between a run-in with Ba'Gamnan, and Penelo eventually entering the airship with Tomaj in an attempt to stop Vaan, he manages to activate the airship with the auracite, causing it to fly away from the Royal City, and he discovers that the auracite in his hands can also summon monsters to aid him.

The airship heads for the Lost Purvama of Lemurés, a place hidden in the Mist. After doing a first reconaissance of the place, Vaan and Penelo meet Llyud, an Aegyl and local of Lemurés, which is being invaded by Sky Pirates since Ashe destroyed the Sun-Cryst in the previous game, causing the Mist barrier around the continent to fall. Deciding to help the Aegyl protect their home, Vaan and Penelo soon become embroiled in a chain of events that may end up threatening all of Ivalice...