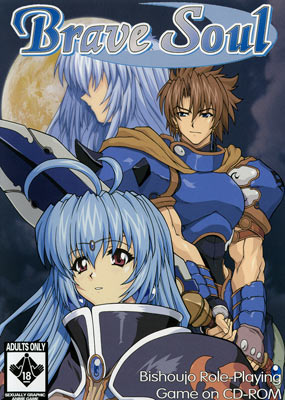 Brave Soul is a hybrid Eroge/RPG for Windows, released by Crowd and translated into English by Peach Princess. It chronicles the adventures of a young man named Rudy (who the player can rename as he/she sees fit) as he sets out on his own (accompanied by a tiny dragon named Shell), and the women he meets along the way. The player equips Rudy, Shell, and two other party members with weapons, armor, and accessories, as well as set skill shortcuts from the game menu. Combat takes place in real-time, with the player assuming control of Rudy, and the AI controlling the other party members based on preset behavior settings. For example, a magic-user's actions can be set to spend mana cautiously when attacking, prioritize debuffs, or let loose with her most powerful spells, consuming mana potions like water in the process. Experience gained from combat allows characters to level up, which increases their stats. New skills however are learned / earned through events, initiated by the player choosing to spend time at an inn. The party members go their separate ways, pursuing their hobbies and interests, and the player's task is to find them and spend time with them.

The Eroge part of the game is this: the number of missions The Hero undertakes with a girl- some of which have a decision tree at the end- determines Rudy's standing in that girl's eyes. The events are also dependent on which of the game's towns the party decides to take a break in; towns have a degree of importance in the girls' histories, so even if Rudy has gotten in the girl's good graces, an event might not trigger because the setting is wrong. For example, taking a break in a certain town might bring memories back for a girl of when she was just a kid, and she decides to ask you to accompany her to her old home. Rummaging through family albums, she might come across a new spellbook.

The game starts with the Hero having a recurring dream of a naked, blue-haired girl thanking him. He wakes up to find himself on his back, bound, and in the middle of a forest. He's rescued from this predicament thanks to his tiny dragon friend named Shell burning away his bindings (and a bit of him!) in the process. He finds a note from his dad which can be summarized as, "I'm tired of feeding your unemployed ass, so I'm tying you up and leaving you in this goblin-infested forest. If you make it out alive, then you can survive in the big bad world. Love, Dad." He dusts himself off, and tries to make his way out of the woods when he hears a piercing female scream...

Alicia — a blue-haired girl looking for her elder sister, who disappeared around ten years ago. If she's in the party she plays the role of the healer, but is not without offensive skills.

Carol — an intelligent, haughty redhead, who wields considerable skill in ice and fire magic, but prefers fire. She's always on the lookout for rare spells.

Marin — a girl with cat ears and tail. She's lost in this place full of humans, which gets her into trouble sometimes. Her innocence allows her to talk to fey creatures and ask for help from elemental spirits. She's also fast, and handy with a spear.

Ruby — this beautiful thief steals only from the rich, often giving them fair warning of her intent before she actually strikes. She's world-wise, and world-weary. She disdains up-close fights, preferring to rain projectiles on opponents, but she has other talents besides throwing pointy objects.

Claire — an accomplished fencer and expert in lightning magic. She can also wear heavy armor like Rudy, making her a very versatile member of the party - if the player manages to find her.

Caren — Daughter to the King and Queen of Valencia, woefully underinformed on how the world outside the castle walls work, Caren has decided to sneak out of the castle and go on an educational trip.

Frederick Ampholtes Cobden — loud, brash, armoured idiot who follows Rudy around, demanding that they settle things with a duel everytime they meet.

The game offers instances of: