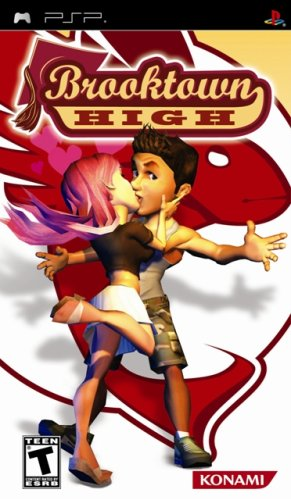 Brooktown High is a PSP Dating Sim developed by Backbone Entertainment (Emeryville) and published by Konami in 2007. According to developer

, Konami approached Backbone with the idea of creating an Americanized version of Tokimeki Memorial. Konami was very interested in the notion, going so far as allowing Backbone developers limited communication

with the staff that created the original Japanese dating sim series.
Advertisement:

Production of the game appears to have started in 2005

that in-game art direction changed at least once, and a pulled GameFAQs forum thread had one developer reveal story scripts were rewritten only days before launch. Despite this, Konami had incredibly high hopes for the title, providing a lavish presence at E3: including cheerleader booth girls and the handout of realistic Brooktown High letterman jackets. Experienced voice talent was hired for requisite dialog, and the soundtrack featured tracks from several up-and-coming indie bands such as Damone and Dashboard Confession. Konami even printed ads in game magazines and pushed a promotional contest giveaway.