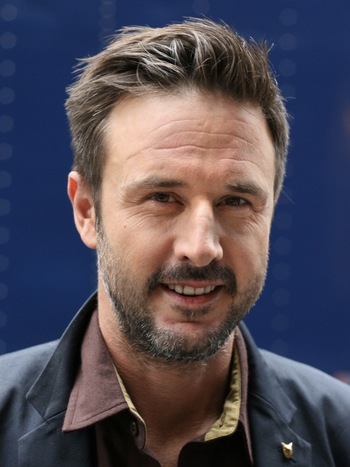 "The first horror film I remember seeing in the theatre was Halloween and from the first scene when the kid puts on the mask and it is his POV, I was hooked."
Advertisement:

Arquette was born on a Subud commune in Bentonville, Virginia, the youngest of five, all of whom became actors, including his older sisters Rosanna, Patricia, and Alexis. His own acting career began in the 1990s, during which time he appeared in a number of movies and had guest spots in several television shows before getting catapulted into stardom via the Scream franchise. He's generally known for playing goofy, comedic characters, even when he's playing a psycho.

He is remembered by Professional Wrestling fans for an infamous stint in World Championship Wrestling (made as a promotional stunt for one of Arquette's films, Ready to Rumble, in which production WCW was involved), where he actually won the WCW World Heavyweight Championship. For his credit, though, Arquette (a lifelong wrestling fan himself) fought against it since he knew it would annoy the fans, but he was contractually obligated, and he quietly donated his paycheck to the families of deceased and injured wrestlers, and as a result has received praise, even going back to the ring on the independent circuit in the 2010s.