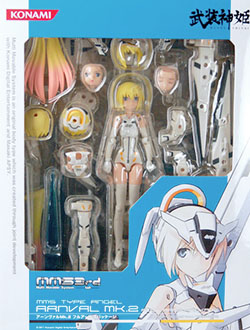 Busou Shinki is a line of female action figures produced by Konami from 2006-2012. The figures, called MMS ("Multi Moveable System") figures, are highly poseable and feature many interchangeable parts. Several body designs are available, but they are not all compatible with each other, even though they all use the same peg-sizes. Most figures consist of a basic body with add-on weapons and armor parts. Another type of release are the EX sets, which only consist of armor and weapons and require the buyer to already own a MMS body. Furthermore, blank bodies that include a stand are also sold for customization purposes or use with EX sets. Each figure stands about 15 cm tall, which amounts to 1:1 scale, as each Shinki is supposed to be a small robot.

Each figure includes a code that allows the figure to be unlocked in Konami's on-line Battle Rondo game and Diorama Studio. Each figure has been designed by a known Japanese artist.

Incidentally, this line of toys is the brainchild of Fumikane Shimada, who is also responsible for Sky Girls and Strike Witches.

Moon Angel covers the story of an Arnval MKII who was rescued and adopted by a boy, who then gave her the name Kaguya, naming her for the beautiful princess from The Tale of the Bamboo Cutter.

The toyline had a tied-in web browser game, Battle Rondo, which was later discontinued in favor of the Battle Masters series of Shinki games on the Sony PSP, and the original Arnval and Strarf MKI made appearances as guest playable characters in Otomedius, where they were portrayed as gynoids made by reverse-engineering alien technology.

As of late 2015, model kit manufacturer Kotobukiya has purchased the rights for Busou Shinki from Konami and has been working on modernized Shinki model kits of the original Arnval and Strarf MKI, with updated articulation and body structure based on the Machineca standard employed in Megami Device figures, which, in itself is an evolution of the MMS body-type. This new generation of Shinki adopted Koto's standardized 3mm pegs for weapons and accessories, as parts can now be interchanged between Kotobukiya's figure lineups, such as the original Frame Arms and their feminized Frame Arms Girls.

In late 2017, Konami made an announcement: they touted a revival

of the Busou Shinki

◊ franchise, with several artists collaborating to design all-new Shinki. The aim, according to the project's slogan, is to "Re Arm, Re Boot, [and] Re Construct". Collaboration with Kotobukiya and a tie-in mobile game have been confirmed. By 2018, Kotobukiya announced the development of the B-Series Megami Device girls, who are basically Busou Shinki being built with the new Machineca bodytype, and started the lineup with all-new Shinki taken from the new mobile game.