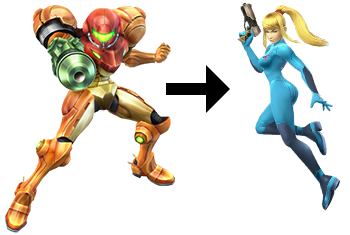 For instant rebalance, just add Samus fanservice.
Solid Snake: Mei Ling, Samus took her clothes off!
Mei Ling: That's just her in the Zero Suit, Snake.
Snake: Without that bulky Power Suit, she's gotten a lot more agile... You know, I bet if I took off all this heavy gear, I could catch her...
— Super Smash Bros. Brawl
Advertisement:

A form of Multiform Balance, where a combatant sheds their armor for the sake of speed. Unencumbered by the weight, they're less resilient, but much more mobile. This can turn them from a Mighty Glacier or Stone Wall into a Fragile Speedster. In cases of extreme power level or where Armor Is Useless, this can lead to the armor effectively being a Power Limiter and/or invoking the Bishōnen Line. The Action Dress Rip is related, in that they're both sacrificing clothing for mobility, though the circumstances are usually fairly different.

Compare Didn't Need Those Anyway!, which often overlaps with this trope when it comes to video game enemies. If it happens to a boss, it's probably a sign that he Turned Red. Compare also Disposable Vehicle Section; sometimes overlaps when the thing being shed is the vehicle's protective armor.

The Pharaoh Zombie (second row from top) is very slow in his sarcophagus but is much faster once it is destroyed.

The Pharaoh Zombie (second row from top) is very slow in his sarcophagus but is much faster once it is destroyed.