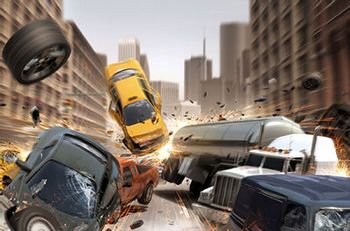 You just had to cut me off, didn't you?
Battle Racing Ignited
— Tagline from Revenge and Dominator in some regions
Advertisement:

Burnout is a Racing Game series by Criterion Games with "full contact" rules, set on city streets, and usually densely populated streets at that. The older games had fixed tracks with a start line/finish line and some opposing cars. As the games advanced, so did the "contact" part of the game, starting with Crash mode in the second game, and the addition of Takedowns and Road Rage mode in the third. The game is known for being very "fast", with the screen blurring out at extreme speeds and handling becoming this side of impossible. Also known for its spectacular camera views of cars spinning through the sky or crunching under trucks, which is totally fucking sweet.

Tropes used in the Burnout series: