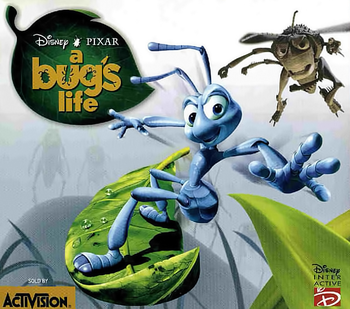 A Bug's Life is the 3D Platform Game adaptation of the Pixar film of the same name, released in 1998 on the PlayStation, Nintendo 64, and PC. It was developed by Traveller's Tales, making it their second Pixar-based Licensed Game after Toy Story.
Advertisement:

The game follows the movie's storyline with Flik as the player character, featuring fifteen levels with every third being a boss stage. The central gimmick is growing plants; Flik can carry and plant large seeds to produce various plants that help him progress, and he can collect tokens that grant him new colors to turn seeds into and new plants to produce from each seed color. Each level has a main goal to reach (most of them being to reach an exit, though some require collecting items or finding characters) as well as three Success Tokens that can be collected through completing other tasks.

Traveller's Tales would later develop Toy Story 2: Buzz Lightyear to the Rescue!, another Pixar 3D platformer that shares some traits with A Bug's Life but is otherwise a more traditional collectathon.