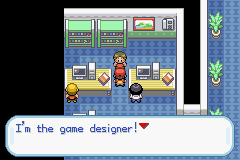 "Congratulations! You found me! Here, have some points."
— Christy Marx, Conquests of the Longbow
Advertisement:

The Developer's Room is an area in a video game filled with Author Avatars and in-jokes. It has no bearing on the story, it's just an Easter Egg — but that doesn't make it any less fun, as it may also contain some additional rewards and goodies for the player alongside all the "thank you for playing our game" messages. Unlike a Debug Room, which almost always requires a code (sometimes a built-in one, sometimes not), a Developer's Room can often be reached on a normal playthrough.