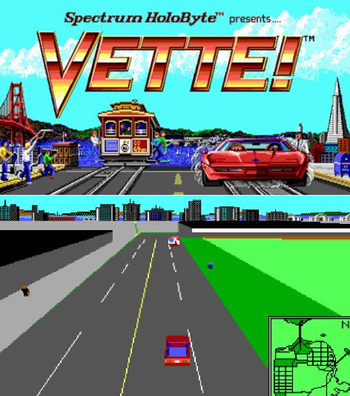 Vette! is a 1989 racing video game where the object is racing a Chevrolet Corvette through the streets of San Francisco. The game was notable for its (at the time) detailed un-shaded polygon rendering of San Francisco streets. It was released on three floppy disks with a Black & White or Color version available. It was also released with a large instruction manual that gave detailed specs about the cars and details about various areas in the city. At the beginning of the game, you were prompted to answer a question from the manual to prove you own the game. If you falsely answered, then you were able to play for limited time before a window popped up claiming, "You are Driving a Stolen Vette" and the game crashed.
Advertisement:

The game featured a completely 3D rendered San Francisco, with many famous landmarks visible in the game including the Golden Gate Bridge and the San Francisco Bay Bridge, and you can even drive down Lombard Street, known as the "Crookedest Street In The U.S." by locals. The game gave players freedom that was not seen in games before, and for many years after, Vette!'s release. There were also many features that were unheard of in 1989, including: