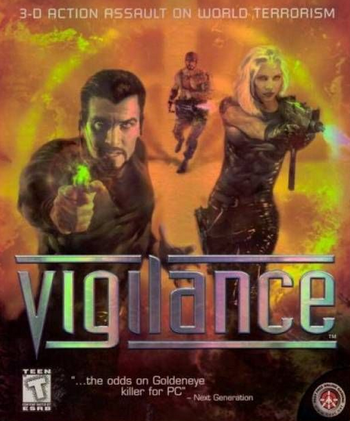 Vigilance, a Third-Person Shooter developed by Postlinear Entertainment, was released in 1998 for PC. It came under fire after its release for its lack of mid-level saving ability, awkward control scheme, and massive swap file. The project took over 2 years and $2 million to create. Aside from the basic single player mode, it also supported LAN play and play over the defunct Heat.net service, which was shut down in 2000. The game was considered SegaSoft’s first venture into 3D shooters. The game combined both first and third person perspective.
Advertisement:

The single player campaign followed eight agents working for the counter-terrorist organization SION. SION stands for Special Intelligence Operations Network. The game allowed the ability to play as one of eight SION agents each with varied strengths and weaknesses. The abilities were based on speed, stealth, armor, assassin, sniper, demolitions, etc.

Unrelated to a 1996 game Vigilance On Talos V.