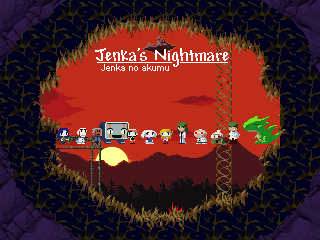 Jenka's Nightmare is a fan-made sequel to the popular indie game Cave Story, and was created by Mark "shmitz" Major in 2009. The game was made to approximately 66-75% completion, and was then abandoned.

Many people would later try their hands at making changes and their own endings to Jenka's Nightmare in an attempt to finish what shmitz started. A notable attempt at this completion was made in 2011 by "MagicDoors", with their own unique ending to the game that received mixed reception, and was considered by many to be the 'true' ending to Jenka's Nightmare.

In December of 2012, Zachary "ZarroTsu" Baillie quickly picked up the mod himself, and set out to reboot the mod entirely from scratch, using the original mod's story and setting as a base. As of May 4th, 2014, Jenka's Nightmare is finally complete, and is considered to have gone far above and beyond MagicDoors' attempt. As of January 18th, 2015, the version is 3.0.0.1. The game, as of now, has recieved its final major update, and any future updates are tentatively bugfixes.The mod occurs after the events of the original game's secret ending, so one can expect this article to be Spoiler heavy. To avoid abusing the spoiler tag for the entire article, however, all information from the original game will be treated as 'known'. It is highly suggested that you complete the original game before reading this article.

Quote, Curly, and Balrog have spent a long year enjoying their new lives away from the island after the events of Cave Story, and the defeat of The Doctor and Ballos. Suddenly, and without warning, they are teleported back to the island by a desperate and defeated Jenka, and immediately separated.

From the get-go it's evident that the entire island has been physically changed by some strange forces acting upon it. What has happened to the island after the previous events? It's up to Quote to find his friends and figure out the mystery behind these new forces, meeting old allies and new enemies along the way.

The official release and discussion topic can be found here.