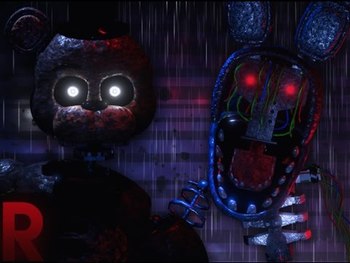 Will you be able to find your Joy of Creation?
"We act, we pose, we play, we stop, we stare, we scream. We bring his visions to life, because that is how we live. Feeding from the joy of creation, and burning what remains."
Advertisement:

The Joy of Creation: Reborn is a fan-made horror game inspired by the Five Nights at Freddy's franchise. Its first version was published on Gamejolt April 6th, 2016.

After Endless Mode's development was complete and released, Nikson began working on "Story Mode", starting with the "Living Room", where all animatronics have the player trapped in their living room.

The story mode was completed on July 17th, 2017, and goes a little something like this: A family finds that a man named Michael had arrived in their house in the middle of the night, and he can barely remember how he got there. Worried, the family allows him to rest at their home, but they quickly find that Michael wasn't alone...

In August 2020, it was confirmed that all 3 games (the original, Reborn, and Story Mode) are being bundled up into one game: The Joy of Creation: Ignited Collection, as part of Scott Cawthon's Fazbear Fanverse Initiative. The original and Reborn are being reworked entirely, while still keeping the arcade highscore-based gameplay, while the story mode is planned to have more minor changes in terms of gameplay, but there are expected to be changes to the story itself.

The Joy of Creation: Reborn

Michael sure knows more than meets the eye...

Example of:
I Never Told You My Name

The Joy of Creation: Reborn

Michael sure knows more than meets the eye...