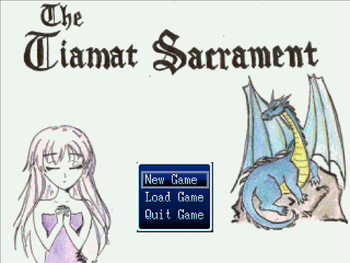 The Tiamat Sacrament is a game made in RPG Maker 2003 by Drakonais in 2010.
Advertisement:

In the past, the Evil Overlord Ry'jin annihilated all dragons after using their DNA to create an army of Super Soldiers. He then used this incredible power to rule Ildria with an iron fist. A rebel group has formed to stop him, but they are too little in number to make much progress. However, they have hope: one dragon survived Ry'jin's extermination, Az'uar. He hatches during the game's opening, his egg disguised as an ordinary rock. As a newborn, Az'uar is very confused and has little knowledge of the world around him. Fortunately, he is able to draw on the wisdom of his ancestors through the dragons' "Blood Memory" (a sort of collective Transferable Memory of all dragons who have ever lived), but it is clouded due to the near-extinction of the dragons. With the help of the rebels, he tries to seek out the seven dragon sages who formed the ruling body of dragon society in the past. He hopes that with their knowledge, he will be able to gain the power to combat Ry'jin's forces. However, he soon learns that not all of them are as helpful as he believes, and that his survival may cause more harm than good...