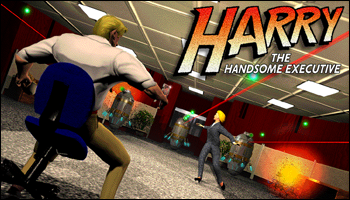 ScumCo is a Dangerous Workplace, and Harry is its finest troubleshooter: a Badass Bureaucrat packing a Staple Gun, power-kicking off walls in his mighty Swivel Chair. But years of service have left Harry with nagging questions, like: what exactly does ScumCo do? Why is it housed in a sinister black obelisk? And does his boss, Dr. Ubermann, plan on being his FINAL Boss?