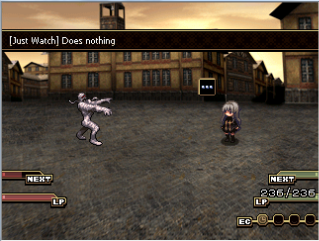 "The effect? I guess you just watch?"
Advertisement:

lost fragment - Standstill Girl is a freeware turn-based RPG created by Sky Scraper Project using RPG Maker 2000. It tells the story of a girl with no memories named Alice who lives in the Land of Time, a place outside the normal space-time continuum, with a boy named Tiska, who serves the guardian of the Great Clock that administers time. Other than these two, the town is populated by friendly blob-like creatures called Shadelings.

One day, the hands of the Great Clock disappear, causing time to stop in the Land of Life (that is, the human world). In an effort to help her friend, Alice thus sets out to retrieve the hands, and as she recovers them she starts uncovering her past...

Battles are fought side-view, using an active time system of sort. You can equip up to 5 actions, including guarding and using items, to use during battle. There are no MPs; instead, each turn you get an Energy Core, of which you can hold up to 4 at time. Generally, stronger skills require more EC, though a lot of them are also Cast from Hit Points. Also, you don't gain levels, but use the "Force" obtained from defeating enemies to power up your three stats: Stamina (Health), PSY (Attack) and AGL (Speed).

It has been translated and can be downloaded for free here