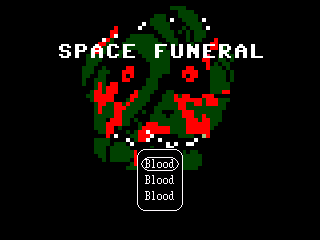 Oh, there will be blood, alright.
"This is a JRPG no longer working in tropes, but in psychotropes."
— Rock Paper Shotgun review

Your name is Phillip. You happen to be an eternally-sad man clad in pajamas who exists in a gaudily-colored world of — interesting features and characters, but most of all a plentiful abundance of blood. Apparently, life wasn't always like this, and Phillip and his soon-to-be companion Leg Horse journey to the City of Forms in an effort to set everything right again.

Made by thecatamites using RPG Maker 2003 and released in 2010, Space Funeral technically does have role-playing elements, but they're downplayed in favor of emphasizing its odd, garish aesthetics. The game's music, a motley mix of mellow '60s classic rock, '80s Japanese electronica, and other antiqued styles, only adds to the weirdness. Other highlights include largely macabre-yet-amusing writing, and a seemingly nonsensical story that intertwines wizards, Lucy from Peanuts, pirate squids, cranky mummies, literal crime lords, living slabs of steak, and Dracula. Oh, and there's enough blood for everybody!

Although on the short side (it's possible to complete the game in well under an hour), Space Funeral is a fun deconstruction and parody of horror genres and role-playing games. You can find the game available for download here

was created by Dark Chibi Shadow. Another one, Space Funeral: Earth Birth, was made by tumblr user Duck Stapler

. Thecatamites himself actually liked the games and declared them canon (though the seriousness of it is debatable).