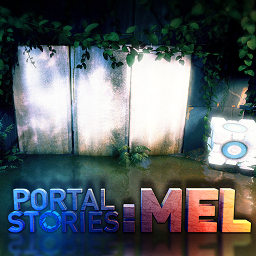 Portal Stories: Mel is a free, community-made Game Mod for Portal 2 made by Prism Studios, based in the Portal universe. It tells the story of Mel, who meets a new personality core and faces an undiscovered threat to the Aperture facility.

Our protagonist, named for a Dummied Out Portal 2 character, is one of the early "Astronauts, Olympians, and War Heroes" chosen to test at Aperture Science Innovators in 1952. Her assignment is simple—a short sleep in their new Relaxation Vault. However, when she wakes, she finds her surroundings deteriorated—and a voice that is decidedly not Cave is claiming to be him and ordering Mel to evacuate. With the aide of an early Handheld Portal Device, Mel will find her way out of Aperture's desolate underground, make an ally in the imposter, and find out what happened to the facility—and herself...