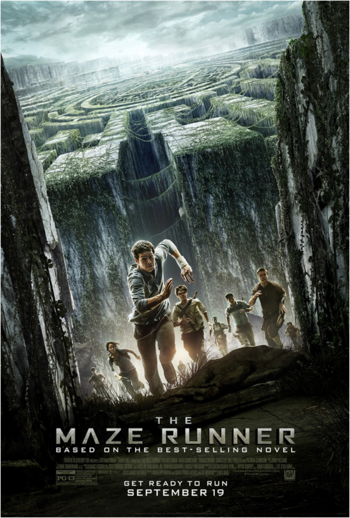 Bring back hope. Always be alert. Never stop running.
"What if we were sent here for a reason?"
— Teresa
Advertisement:

The Maze Runner is a film adaption based on the book of the same name by James Dashner, which was released on September 19th, 2014. It is the first in The Maze Runner Series.

When a boy named Thomas wakes up in a rusty elevator with no memory of his identity, he is delivered to the middle of a maze, along with a small population of other boys, who have been trying to find their way out of the ever-changing labyrinth – all while creating a functioning society in what they call the Glade. His curiosity leads to multiple discoveries, with the most significant being the prospect of an escape route. However, tensions in the community, exacerbated by the arrival of a girl in the Glade, threaten this new hope. Will they escape? Or will the horrors of this maze finally get to them?

This film is the directorial debut of Wes Ball. The cast includes Dylan O'Brien as Thomas, Kaya Scodelario as the only female in the Glade, Teresa, Aml Ameen as Alby, Thomas Brodie-Sangster as Newt, Ki Hong Lee as Minho, Will Poulter as Gally, Patricia Clarkson as the Big Bad, Ava Paige, and Blake Cooper as Chuck.

This film is followed by Maze Runner: The Scorch Trials.

The Maze Runner contains examples of: