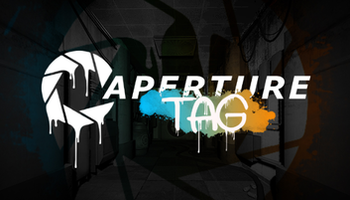 Now you're thinking with gels.
"While we know you really don't have a choice, the Aperture Tag department is happy with your choice!"
—Nigel, Steam Greenlight trailer
Advertisement:

A Portal 2 mod, later released through Steam Greenlight. Aperture Tag swaps out the Aperture Science Handheld Portal Device for the Aperture Science Paint Gun, a gun that shoots the Propulsion and Repulsion gels. Armed with the ability to paint virtually any flat surface with mobility gel, the player is presented with a range of new puzzles, including puzzles from Portal 2 that must now be solved with the new mechanics.

Set after the first co-op campaign of Portal 2, Aperture Tag casts the player as one of GLaDOS's new human test subjects and contains a full-length single player campaign. Accompanied only by your test supervisor, a personality core named Nigel, the player has to work through yet another one of Aperture Science's testing tracks.