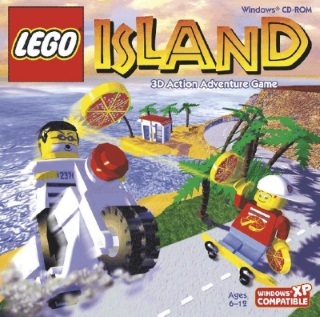 "You can move a mountain if you do it brick by brick!"

LEGO Island is a trilogy of video games based upon LEGO, the original game being the first video game ever based on the LEGO license... released outside Japan.note The very first Lego video game was Lego Fun to Build, a Sega Pico game that was released only in Japan in 1995. The main character is Pepper Roni, a pizza delivery boy who manages to get mixed up in all sorts of off-the-wall shenanigans because of The Brickster, a criminal mastermind who loves anchovies and hot peppers. The games are always set on the aforementioned Lego Island, where even though the location is constantly being shifted and changed as the games go on, the overall wackiness and adventure never go away.

The PC-exclusive first game puts you in the shoes of one of five different playable characters, with activities including delivering pizzas, participating in races, and playing the occasional minigame. Woe to he who chooses the "Pepper/Pizza" combination assignment, though... Aside from the main plot with Pepper, the player can also control the sibling police officers, Nick and Laura Brick, and Pepper's employers/adoptive parents Mama and Papa Brickolini.

The second game, LEGO Island 2: The Brickster's Revenge is somehow more outlandish. Once again, you unwittingly allow the Brickster to escape, and he scatters pages of the Constructopedia across several islands. You have to travel through these islands, including Castle Island and Adventurers' Island, and track down both Brickster and the pages. Pepper is the only playable character, but gameplay is more "varied". The game was released on PlayStation, Game Boy Color, Game Boy Advance, and PC.

In the third game, Island Xtreme Stunts, Pepper is starring in a movie where the Brickster is the villain and the Infomaniac gets kidnapped. The game takes a more Wide-Open Sandbox feel compared to previous games, allowing you to traverse around a much larger island and partake in side missions with the island's populace. Though the games were not based on any pre-existing LEGO theme, LEGO sets based on the games were released for the first time ever to coincide with the release of Island Xtreme Stunts. The game was released for PlayStation 2 and Game Boy Advance. A PC version was also released, but was sadly scorned by performance issues.