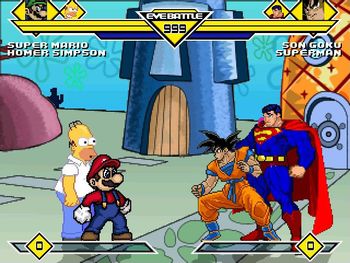 Why are Mario and Homer Simpson fighting against Goku and Superman in Bikini Bottom? Who really cares? It's still fun to watch!
"While it might be 'realistic' for a nearly dead character to limp, move slowly, and have generally less effective moves, it's not fun."
— David Sirlin

Games must be fun to play. Sure, we like pretty graphics and a good plot, but the fun's the main thing. If they're fun, a lot of incongruities can be forgiven. Go ahead, try to explain why the yellow circle loves dots and why the ghosts are out to get him, or why the frog needs to get across the road. You can explain why but it doesn't matter. The purpose of the game was to have fun in the first place.

This was most evident of the very early days of video games, when technological constraints put a limit on the amount of depth or detail a game could have. Back then, designers made sure a game was fun first, then devised a reason later. Besides, all games are basically just a bunch of colliding rectangles anyway — why get too worked up about what the designers decided to cover up the rectangles with?

Of course, this also applies to non-video games. It's possible to create a Tabletop RPG that emulates a medieval swordfight down to the smallest detail — but not many people would find that fun ('real' swordfights were typically very brutal and incredibly brief, which is the antithesis of 'fun' in an RPG); thus, we have Hit Points.

A nonsensical premise, a bizarre story, weird gameplay mechanics — all of these things have no choice but to bow their head if the game is fun. This is the Rule Of Fun. See also the MST3K Mantra, the Rule of Cool, and the Rule of Funny (which, by the way, is a quite different trope).

The Rule of Fun extends to game design, as well as game play: while being a blacksmith, or a tailor, or an engineer, may be fun, the details of the professions (such as the technical aspects of smithing, or the time investment required for tailoring) are decidedly not — therefore, the professions are usually loaded down with lots of neat 'fun' stuff, while conveniently skipping over the fact that there is significant effort involved in the actual production process.

Tedium and boredom have always been the traditional 'enemies' of entertainment. A well-designed game with quick pacing and lots of action will be fun to play; likewise, a game that is badly-scripted or hampered by a badly-executed concept is likely to be very unintuitive and will bore the player.

Tropes that exist partially or totally due to the Rule of Fun: