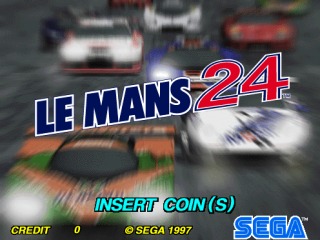 Le Mans 24 is an arcade game produced by Sega in 1997/1998. Despite its production at that year itself, arcade machines portraying this game are still scattered around in some arcades today. The game is popular for being the earliest of games to have a full pit-stop service when issued, provides a somewhat feel of a 24-hour race (while other arcade games usually launch races within the day, evening or night, Le Mans 24 Hours is the only arcade game that lets you play real-time) and not to mention, changes in weather during gameplay. Players can choose up to six cars, all which have been pulled out from the actual 24 Hours of Le Mans races (due to the latest cars that are fast in nature and the evolution of much dynamic and faster prototypes, cars like these have actually no chance of entering Le Mans today) but still exists in other races today.

Despite having classes in the actual race, however, the game has absolutely no classification whatsoever. Players choose their car of choice and proceed to play their best in order to achieve podium finish. As the game progresses, weather changes and traction can deteriorate over time, which requires players to pit when prompted. Also, time can be awarded if:

Not to be confused with the actual 24 Hours of Le Mans race, which the game is based on.