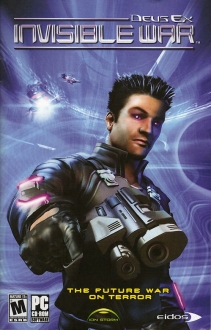 Deus Ex: Invisible War is a First-Person Shooter/Immersive Sim with RPG Elements developed by Ion Storm and published by Eidos. Released simultaneously for Microsoft Windows and XBox in December 2003 in the United States, Invisible War is a sequel to the critically acclaimed Deus Ex.

Invisible War takes place in 2072, twenty years after the original, in a world being rebuilt after the destruction of global infrastructure at the hands of the first game's protagonist, JC Denton. The World Trade Organization somehow forms a global government, creating modern city-states, known as enclaves, in which the majority of the game takes place. All the world's major religions are united into a monolithic fanatical cult strongly opposing the WTO's policies. Following a terrorist attack by an unknown group which destroys most of Chicago, the player assumes the role of Alex D (who can, in a first for the series, be female), a trainee at the prestigious Tarsus Academy whose support as a mercenary is sought by several factions during the course of the game.

The game combines First-Person Shooter, Stealth-Based Game and a few RPG Elements. The gameplay is significantly simplified compared to the original, exemplified in the "Universal Ammo" concept, which gives the player character one (nanotechnological) ammunition store that's used by every single weapon in the game. Other examples include no skill system and plenty of handholding.

If you're having trouble playing it on modern PCs, closing all other running programs may help; despite being over a decade old, the game is something of a resource hog. Also look into setting CPU affinity if you're running multi-core. This is one of those games that gets picky about its hardware.