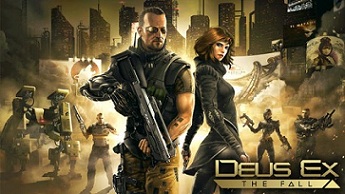 Are You Ready To Take The Fall?
Advertisement:

Deus Ex: The Fall, an Android, iOS and PC game, is a sequel to the novel Deus Ex: Icarus Effect, and a spin-off to the 2011 game Deus Ex: Human Revolution.

During the six months in which Adam Jensen from Human Revolution was in rehab after the attack on Sarif Industries, The Fall focuses on the main character from the Icarus Effect novel, Ben Saxon. Originally developed for mobile platforms, the game was re-released on PC in March 2014... poorly.