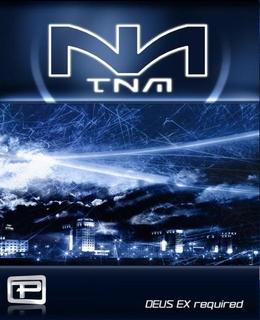 Ghandaiah: OH DEAR GOD, I HAVE POCKETS!
King Kashue: Back to your office, Ghand!
Advertisement:

An award-winning mod for Deus Ex, over 7 years in the making, that actually came out in March 2009.

The game is set in Forum City, a virtual representation of exactly that - a social internet forum. Forum City is a hub for myriad industries and social interaction, as the virtual forum has become the medium of choice for running society. This makes all the problems endemic to forums magnify a thousand-fold: flame wars are actual REAL wars fought between people of opposing ideologies, and crime committed in the forums is actual crime with real-life consequences. The Moderators of the forums, therefore, are powerful entities indeed, nigh-invulnerable beings with the power to stop anyone cold in the name of maintaining order.

The game starts when one of said Moderators disappears, causing an enormous vacuum in the city's established order. This happens at the worst time possible: two religious cults are engaged in all-out war inside the forums, and online crime is at an all-time high. The remaining Moderators have been spread too thin, and they can see disaster looming on the horizon. Enter Trestkon (that's you!), a former intelligence agent with old ties to the Moderators, who left Forum City years ago for reasons unknown. The Moderators ask Trestkon to investigate the disappearance of their colleague: what Trestkon does, who he allies himself with, and ultimately the fate of the entire city is in your hands.

Can be downloaded from Mod DB

or on Steam as a workshop item

For characters to this game mod, go here.

As a mod for Deus Ex many of the tropes on that page still apply. This mod also provides examples of: