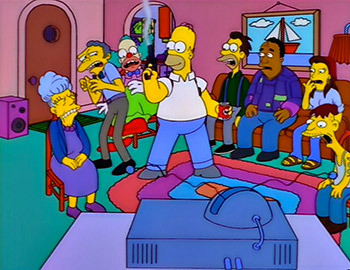 Hey, yutz! Guns aren't toys! They're for family protection, hunting dangerous and delicious animals and keepin' the King of England out of your face!
Inspector Yang: You can't bring guns in here! This is a church! It's a holy place!
Inspector Watson: That's okay. You see these? These are holy guns. Because they make a rather large hole-y.
— The Medallion
Advertisement:

Guns In Church is what occurs when a weapon is carried or brandished when not appropriate. When you have Guns In Church, the bank, the supermarket, the U.N, an airport, or anywhere else where the very mention of a weapon could be grounds for arrest, people in games are surprisingly aloof to the dangers it presents. As a result, everyone fantasizes about owning a sword/gun/etc that will never leave their side in all of life's journeys.

In Real Life, however, throughout most of the developed world, life is just peaceful enough that this is typically a bad idea. With an individual who normally is expected to carry a weapon (such as a knight, policeman, or soldier), if they have a means to store a weapon that can be easily drawn, this trope then is restricted to them actually carrying it. (For example, a policeman who has a gun in his hand everywhere he goes, leaving his holster empty.)

Some weapons (such as rifles, large machine guns, and Arm Cannons) can't be sheathed or holstered, and due to context, the trope is often averted by necessity. If you are a soldier, then chances are, not only do you play the trope straight, but you're actually better off for it. The same does not hold true for an average white-collar office drone walking down the street holding a claymore. (The mine or the sword).

Compare Improbable Use of a Weapon, when a weapon may be appropriate, but the one used is unlikely or impossible. Also, Ornamental Weapon, where it is carried, but doesn't get used for other reasons. Averted in settings where carrying weapons is unremarkable because Everyone Is Armed. Brats with Slingshots has a tendency to reflect this trope but with Children. Axes at School is a sub-trope specific to schools.

For when a shootout actually does take place in a church, this is combined with Bloodstained Glass Windows. If the clergy are taking an active part in the proceedings, they may be members of a Church Militant.

Why do these examples have their weapons out?