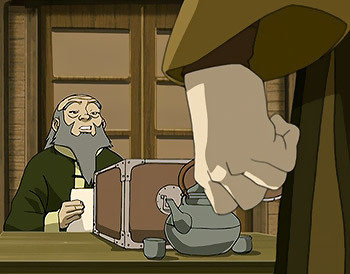 Oh, and as I watched him on the stage
My hands were clenched in fists of rage
— Don McLean, "American Pie"
Advertisement:

So your plucky hero has decided that enough is enough and has retired from the scene, looking to return to a life of mundanity and safety. Unfortunately, the villains just can't leave well alone and the next thing you know, the Hero's girlfriend has been kidnapped/house burned down/dog has been shot, and the Hero watches the wrong-doers ride off laughing into the distance.

Cut to the hero's hand, hanging limp by his side. In comes the Theme Music Power-Up as the hand slowly curls into a fist. The fist quickly turns white with intense squeezing — maybe it even trembles with determined strength. He's Back!! Cue the Roaring Rampage of Revenge!

The dramatic clenching of a fist is often used as a visual signal that the character's resolve to perform the upcoming series of heroics is hardening, or as a signal that they have regained something — physical or mental — that they needed but were previously lacking. Also done during climactic fights — the villain seems to have the upper-hand and stands gloating over the Hero, who then manifests a Fist of Fury and returns to the battle with previously unseen strength.

Occasionally paired with a Power Fist, and invariably done even though the character's powers and abilities (if any) might not be related to their hands, or even physical prowess.

Truth in Television. It is a common trait for someone who is frustrated or anxious to clench and unclench their fists as they try to decide upon a course of action. While not necessarily a "furious" version, a clenched fist in real life will often reflect the closing of an internal conflict, even if violence is not directly about to ensue.

George clenches his fist and clocks Biff with it.

George clenches his fist and clocks Biff with it.