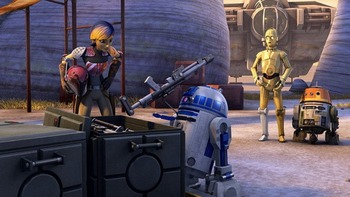 Bail Organa: The simplest gesture of kindness can fill a galaxy with hope.
Kanan: Isn't that... a Jedi saying?
Advertisement:

Short on money, the crew takes a job from the Broken Horn crime syndicate to hijack an Imperial weapons shipment. The job, however, hits Zeb personally when he finds out that shipment consists of T-7 ion disruptors, handheld rifles capable of taking down starships that were used to decimate his homeworld of Lasan. Successfully hijacking the shipment, the crew draws the attention of Agent Kallus and ends up picking up a couple of familiar faces along the way.