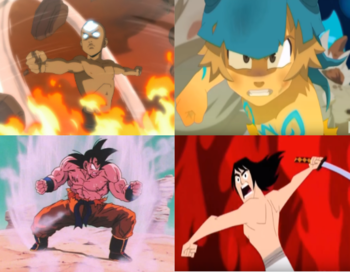 The Final Battle is where stakes are at their highest. The Hero must engage the villainous Big Bad in an epic teeth-clenching fight. And what better way to highlight the incredible resolve of the protagonist, in addition to giving him some visual flare during this battle than giving them a bit of Clothing Damage, specifically on the upper body.

This trope occurs when the protagonist is fighting a tough battle and ends up losing his shirt due to it being torn apart, most likely by their opponent's attacks. This usually happens during the climax, although it can happen in non-final battles if they still have an above-average degree of intensity. The reason that this is done can be to show the effects of the villain's attacks on the hero without giving the hero any major wounds. In addition to this, bearing the hero's chest is a way of showing off their well-toned physique and/or battle scars. This can also happen to emphasize the hero's pureness and how they've ascended past all expectations and grown up since the beginning. When the villain is defeated, the scene usually ends with the supporting cast congratulating him on his victory, keeping him on his feet, or just staring in awe at the still bare-chested hero.

This trope happens very often in martial arts movies, as well as in Shonen genre anime, where the hero will most likely have at least one in-fight Shirtless Scene. However, this is primarily an Always Male trope, due to women having more...regions in need of censorship. Though you will occasionally see female characters reduced to a tank top, which is reminiscent of this trope.

Related to Clothing Damage, which refers to the general loss of clothes which doesn't have to be due to fighting. When a character loses all their clothes for a battle, it's Full-Frontal Assault. Also see, Walking Shirtless Scene and Mr. Fanservice. Compare, The Coats Are Off. Not to be confused with Battle Strip, where a character willingly removes their top.