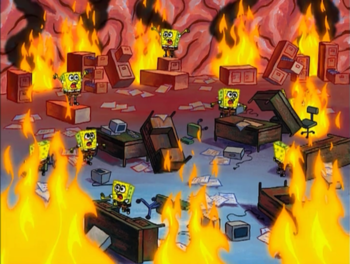 "WE THREW OUT HIS NAME!!!"
Advertisement:

Yikes! Everything's going crazy for some reason! Maybe it's an Angry Mob, or a scared one (known as "mass panic"), or one that's both angry and scared, or a monster is attacking the town, or, in some comedic works, it's just a mundane (but still chaotic) scenario such as a struggle for the last cookie blown out of proportion. And the scenery is on fire to let the audience know just how chaotic the situation is!

Usually played for drama or Black Comedy and it's typically up to the audience's imagination how the fire itself started, though occasionally we will see the fire starting in the background.

Additionally, while background characters may be seen running away from, or putting out, the fire, it's not the main focus of the scene, and, when played for drama, it's never the main source of the drama. Otherwise, it stops being a shorthand for chaos and starts being just regular dramatic fire, which isn't a trope since we all know fire is dangerous.

Sometimes Truth in Television because people are known to commit arson during riots, and there are some substances that can easily catch fire if accidentally knocked onto a fire.

Subtrope of Scenery Gorn and can overlap with Battle Amongst the Flames. Damage Is Fire is a related concept when fire conveys damage in video games. See Pyromaniac for characters who like to commit arson, and Explosive Instrumentation for a similar but usually less comical visual shorthand for "everything is going to hell in a handbasket and the protagonists are in trouble". Compare Evil Is Burning Hot (if both tropes are in play, see Chaos Is Evil).